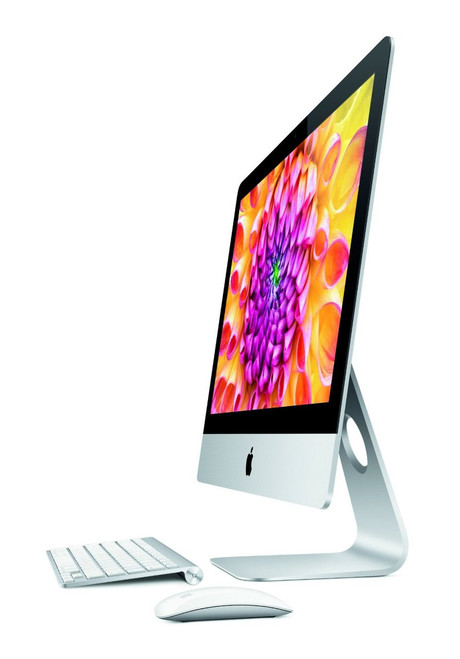 Featuring a beautiful 21.5-inch widescreen display and an impossibly thin enclosure that's only 5 mm at the edge, the stunning all-in-one iMac has been updated with a fourth-generation quad-core Intel Core processor — making it the most powerful iMac yet. This 21.5” refurbished iMac comes standard with 8 GB of memory, a 1 TB hard drive, and advanced, high-speed I/O, including two Thunderbolt ports and four USB 3 ports. The Apple iMac Intel Core i5 also now supports next generation 802.11ac Wi-Fi. 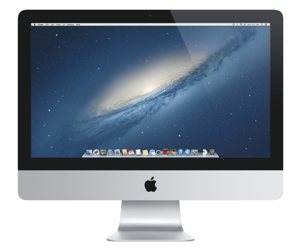 The 21.5-inch iMac is just 5mm thin at its edge and features a bright display with 75 percent less reflection.

Since OS X is designed to take advantage of each core, the fourth-generation Intel Core i5 quad-core processor (based on the latest Haswell architecture) captures every bit of performance from the processor. When you need more power for a processor-intensive application like Aperture or Final Cut Pro, Turbo Boost 2.0 automatically increases the speed of the active cores. And by shifting core frequency in small increments, Turbo Boost allows the processor to manage performance without sacrificing efficiency. 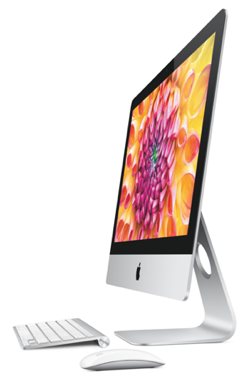 This 21.5” refurbished iMac model is powered by a 2.9 GHz quad-core Intel Core i5 processor with Turbo Boost speeds up to 3.6 GHz. It's complemented by the Nvidia GT 750M video card with dedicated 1GB GDDR5 memory which delivers a built-in, eye-popping visual experience.

The Apple iMac Intel Core i5 now supports ultrafast 802.11ac Wi-Fi. When connected to an 802.11ac base station — including the new AirPort Extreme and AirPort Time Capsule — wireless performance is up to three times faster than with the previous generation. And your Wi-Fi range improves as well.

Nothing will distract you from what you're viewing on the iMac's 21.5-inch display thanks to the innovative display design that reduces reflection by 75 percent while maintaining brilliant color and contrast. Additionally, in-plane switching (IPS) technology gives you a bright picture with excellent color from nearly any angle while the LED backlighting offers instant-on, uniform brightness.

Delivering an amazing 10 gigabits per second of transfer speeds in both directions, the ultrafast and ultraflexible Thunderbolt port allows you to move data up to 20 times faster than with USB 2.0 and more than 12 times faster than with FireWire 800. You can also daisy-chain up to six Thunderbolt-compatible peripherals without using a hub. Thunderbolt also supports DisplayPort for high resolution displays and works with existing adapters for HDMI, DVI, and VGA displays.

The iMac also comes with four USB 3 ports, enabling you to connect your external hard drive and transfer large files in seconds instead of minutes with speeds up to 10 times faster than USB 2. And you can connect all your USB-compatible devices, including your iPhone, iPad, iPod, or digital camera.