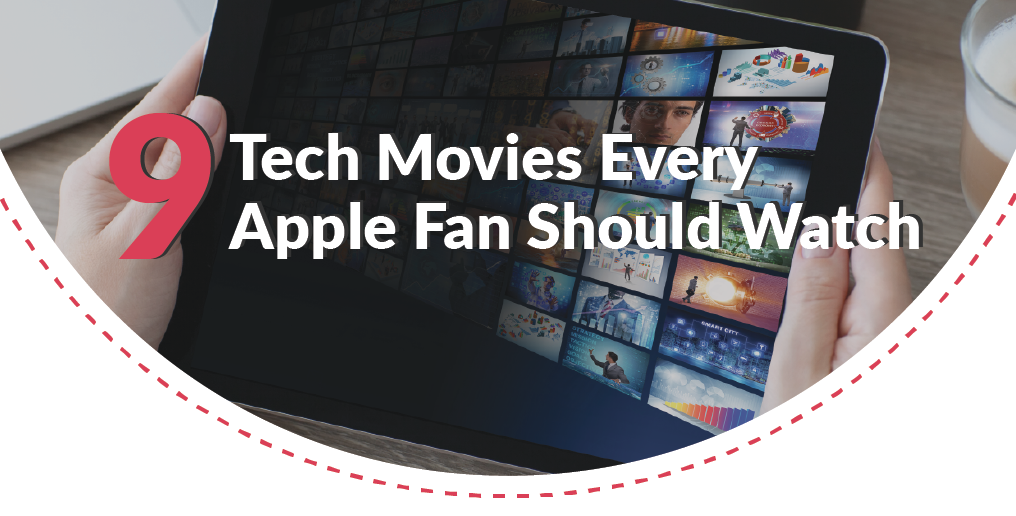 Apple is everywhere. From wearables to iPhones and MacBooks, the brand has conquered the world. With a company as big as Apple, it’s impossible for it not to influence pop culture and be the center of Hollywood media, such as movies. In fact, Apple is so influential that its late founder and CEO Steve Jobs has been portrayed in movies many times. Moreover, a lot of films have focused on the same technology introduced by Apple.

So if you are an Apple fan, you can learn new fun facts about the tech genre by watching the movies we suggest in this infographic.

The Oscars are awards presented yearly by the Academy of Motion Picture Arts and Sciences to recognize outstanding accomplishments in motion picture performance and production. But how does this relate to tech movies? Check out our fun facts!

If you want a list of the best SciFi movies of all time, you are in the right place. Here’s a list of the most iconic tech cinema, from game-changers to disruptive masterpieces.

Ready Player One is a science fiction action-adventure. Based on Ernest Cline's best-selling novel, the movie takes place in 2045 when the world is on the verge of collapse. However, the OASIS, an immense virtual reality environment developed by the brilliant and eccentric James Halliday (Mark Rylance), provides redemption for the populace.

Upon Halliday's death, he gives his vast wealth to the first person to discover an Easter egg he has buried somewhere in the OASIS. This ignites a global tournament. When an unexpected teenage hero named Wade Watts (Tye Sheridan) enters the battle, he is thrown into a fast-paced, reality-bending treasure search across a fantasy realm filled with mystery, discovery, and peril.

Steve Jobs takes us behind the scenes of the digital world’s revolution – painting a picture of the man who sparked it all. The narrative takes place behind the scenes of three landmark product launches, culminating in 1998 with the introduction of the Mac. Steve Jobs (Michael Fassbender) and Steve "Woz" Wozniak (Seth Rogen), co-founders of Apple Inc., prepare to introduce the first Macintosh in 1984.

Jobs eventually leaves Apple and establishes NeXT Inc. to prepare the debut of a new computer model in 1988. Ten years after, Jobs returns to Apple to disrupt the industry once again with the iMac.

With the introduction of the Apple 1 in 1976, college dropout Steve Jobs (Ashton Kutcher) and technical whiz-kid Steve Wozniak (Josh Gad) began a revolution in personal computers. Built in Jobs' parents' garage, the gadget – and the eventual foundation of Apple Inc. – forever altered the course of human history and started the successful future of Mac.

Her revolves around a soulful, sensitive man Theodore (Joaquin Phoenix). He is a hipster-clad fashionista and greeting card writer. After his marriage ends, Theodore falls in love with Samantha (a new operating system voiced by Scarlett Johansson). As the story progresses, their relationship eventually deepens into love. He then learns a little about life, a little about love, and a few other things that have won the film an Oscar nomination for best picture.

The Social Network is a film about Harvard undergraduate Mark Zuckerberg (Jesse Eisenberg), who developed the social networking site that would later become known as Facebook. He was sued by the "twins" (who had alleged he stole their concept) and by Facebook's co-founder, who was subsequently forced out of the firm. The Social Network covers the narrative of Facebook's development, from the initial concept through the friendships and drama-worthy betrayals.

Sam (played by Garrett Hedlund) is the son of renowned video game creator Kevin Flynn (Jeff Bridges). Sam has been troubled by his father's strange absence for a long while. One day, Sam is drawn to Flynn's Arcade by a peculiar signal and then into the same cyber world in which his father, the founder, has been imprisoned for 20 years.

Kevin and Sam join forces with fierce warrior Quorra (Olivia Wilde) to flee a world that, although lovely, is considerably more evolved and frightening than Kevin ever imagined.

When a gorgeous stranger takes computer programmer Neo into a foreboding underworld, he finds the startling truth: the life he knows is an elaborate lie orchestrated by a malevolent cyber-intelligence. Morpheus (Laurence Fishburne) lures Neo, a computer hacker portrayed by Keanu Reeves, from enslavement. This cyberpunk film popularized concepts like wall-running, bullet time, and virtual reality, as well as inspired an entire generation of video games, literature, and tech films.

Pirates of Silicon Valley first came out in 1999 and was based on the book Fire in the Valley: The Making of the Personal Computer. It looks at the rivalry between Steve Jobs (Noah Wyle) and Bill Gates (Anthony Michael Hall).

Pirates of Silicon Valley is a semi-comedic biographical film about the men who have helped shape the modern world of technology, their challenges in college, the establishment of their now successful firms, and the innovative moves they took to develop the worldwide corporate empires of Microsoft Inc. and Apple Computer Corporation.

Rick Deckard (played by Harrison Ford) is a Blade Runner tasked with pursuing and eliminating four replicants who hijacked a spaceship and returned to Earth in search of their creator. The film's portrayal of Los Angeles in 2019, complete with flying automobiles and a strong Asian influence, is a case study in constructing a science fiction world that is grounded on facts.

Deckard employs a machine to ascertain if a person is a replicant or a human by analyzing their emotional reactions to questions. The hunt takes Deckard to eye-ball manufacturers and futuristic strip clubs until he discovers the replicants he's hunting are attempting to break into the sinister Tyrell Corporation, which keeps the ultimate creator.

Why These Movies Are Must-Watch for Apple Fans

Apple fans are known to be one of the most loyal fans in the tech industry. This loyal fanbase has served as Apple’s natural word-of-mouth marketing backed by the commendable performance of the Apple products. And, movie and Apple fans have so much alike.

These tech movies that have picked your mind and made you think even beyond the moviehouse have translated innovation and out-of-the-box thinking from paper to screen. Moreover, seeing these movies already gives you access to a community that talks about the memorable lines and iconic scenes.

And lastly, these tech movies have immersed their viewers in a fictional world with a glimpse of the future of technology and where powerful technology could lead you–like Apple.

It's Time to Binge

AI, technical frontiers, and dystopian worlds. Arguably, tech is an understated genre that encompasses a wide variety of topics – from inspiring biographies to worlds set in the past, present, or far future. It examines everything from the human experience to humanity's potential.

Truly, these nine best technology films for Apple enthusiasts transport us to worlds beyond our imagination, fantasizing about inconceivable possibilities or founding stories that impact our technical advancements.

If these movies have inspired you to use the best technology available in the market, Macs4u offers a refurbished MacBook for sale for you to experience the fantastic Apple ecosystem. Get in touch with Macs4u today!